4) The above series including the standard type, clearance adjustment type and open type

Basic Dynamic Load Rating (C)
This term is arrived at based on an evaluation of a number of identical linear systems individually run in the same conditions, if 90% of them can run with the load ( with a constant value in a constant direction ) for a distance of 50 km without damage caused by rolling fatigue. This is the basis of the rating.

Allowable Static Moment (M)
This term defines the allowable limit value of static moment load, with reference to the amount of permanent deformation similar to that used for evaluation of basic rated load (Co).

Static Safety Factor (fs)
This factor is used based on the application condition as shown in Table 1.

Rating Life of the Linear System
As long as the linear system reciprocates while being loaded, continuous stress acts on the linear system to cause flaking on the rolling bodies and planes because of material fatigue. The travelling distance of linear system until the fist flaking occurs is called the life of the systems. The life of the system varies even for the systems of the same dimensions, structure, material, heat treatment and processing method, when used in the same conditions. This variation is brought about from the essential variations in the material fatigue itself. The rating life defined bellow is used as an index for the life expectancy of the linear system.

Rating Life (L)
Rating life is the total travelling distance that 90% of a group of systems of the same size can reach without causing any flaking when they operate under the same conditions.
The rating life can be obtained from the following equation with the basic dynamic load rating and the load on the linear system:

Consideration and influence of vibration impact loads and distribution of load should be taken into account when designing a linear motion system, It is difficult to calculate the actual load. The rating life is also affected by the operating temperature. In these conditions, the expression(1) is arranged as follows:

Hardness Factor (fH)
The shaft must be sufficiently hardened when a linear bushing is used. If not properly hardened, permissible load is lowered and the life of the bushing will be shortened.

Load Coefficient (fw)
When calculating the load on the linear system, it is necessary to accurately obtain object weight, inertial force based on motion speed, moment load, and each transition as time passes. However, it is difficult to calculate those values accurately because reciprocating motion involves the repetition of start and stop as well as vibration and impact. A more practical approach is to obtain the load coefficient by taking the actual operating conditions into account.
Table 3 Load Coefficient

Using TOB linear systems without lubrication increases the abrasion of the rolling elements, shortening the life span. The TOB linear systems therefore require appropriate lubrication. For lubrication TOB recommends turbine oil conforming to ISO Standards G32 to G68 or lithium base soap grease No.1. Some TOB linear systems are sealed to block dust out and seal lubricant in. If used in a harsh or corrosive environment, however, apply a protective cover to the part involving linear motion.

The TOB linear bushing consists of an outer cylinder, ball retainer, balls and two end rings. The ball retainer which holds the balls in the recirculating trucks in held inside the outer cylinder by end rings.
Those parts are assembled to optimize their required functions.
The outer cylinder is maintained sufficient hardness by heat treatment, therefore if ensures the bushing projected travel life and satisfactory durability.
The ball retainer is made from steel or synthetics resin. The steel retainer has high rigidity, obtained by heat treat meant.
The synthetics resin retainer can reduce running noise. The user can select the optimum type for meeting the user's service conditions.

1.High Precision and Rigidity
The TOB linear bushing is produced from a solid steel outer cylinder and incorporates an industrial strength resin retainer.

2.Ease of Assembly
The standard type of TOB linear bushing can be loaded from any direction. Precision control is possible using only the shaft supporter, and the mounting surface can be machined easily.

3.Ease of Replacement
TOB linear bushings of each type are completely interchangeable because of their standardized dimensions and strict precision control. Replacement because of wear or damage is therefore easy and accurate.

4.Variety of Types
TOB offers a full line of linear bushing: the standard, integral single-retainer closed type, the clearance adjustable type and the open types. The user can choose from among these according to the application requirements to be met.

Note that precision of inscribed circle diameters and outside diameters for the clearance adjustable type ( -AJ) and the open type ( -OP) indicates the value obtained before the corresponding type is subjected to cutting process.

The lift (L) of a linear bushing can be obtained from the following equation with the basic dynamic load rating and the load applied to the bush:

The lifespan(Ln) of a linear bushing in hours can be obtained by calculating the traveling distance per unit time. The lifespan can be obtained from the following equation if the stroke length and the number of strokes are constant:

From equation(2), the lifespan Lh is obtained as follows:

From equation(1), the basic dynamic load rating is obtained as follows:

Assume the following with a pair of shafts each with two linear bushings:

As a result, LM30 is selected from the dimension table as the TOB linear bushing type satisfying the value of C

Note: The clearance may be zero or negative. Please attention the movement.

To optimize performance of the TOB linear bushing high precision of the shaft and housing is required.

1.Shaft
The rolling balls in the TOB linear bushing are in point contact with the shaft surface. Therefore, the shaft dimensions, tolerance, surface finish, and hardness greatly affect the traveling performance of the bush. The shaft should be manufactured with due attention to the following points:
1) Since the surface finish critically affects smooth rolling of balls, grind the shaft at 1. 5 S or better
2) The best hardness of the shaft is HRC 60 to 64. Hardness less than HRC 60 decreases the life considerably, and hence reduces the permissible load. On the other hand, hardness over HRC 64 accelerates ball wear.
3) The shaft diameter for the clearance adjustable linear bush and open linear bush should as much as possible be of the lower value of the inscribed circle diameter in the specification table. Do not set the shaft diameter to the upper value.
4) Zero clearance or negative clearance increases the frictional resistance slightly. If the negative clearance is too tight, the deformation of the outside cylinder will become larger, to shorten the bush life.

2. Housing
There is a wide range of housing differing in design, machining , and mounting. For the fitness and shapes of housings, see Table 2 and the following section on mounting.

When inserting the linear bush into the housing. do not hit the linear bush on the side ring holding the retainer but apply the cylinder circumference with a proper jig and push the liner bush into the housing by hand or lightly knock it in. ( See Fig.1) In inserting the shaft after mounting the bush, be careful not to shock the balls. Note that if two shafts are used in parallel, the parallelism is the most important factor to assure the smooth linear movement. Take care in setting the shafts.

Examples of Mounting
The popular way to mount a linear bush is to operate it with an appropriate interference. It is recommended, however, to make a loose fit in principle because otherwise precision is apt to be minimized. The following examples( Figs.2 to 6)show assembling of the inserted bush in terms of designing and mounting, for reference. 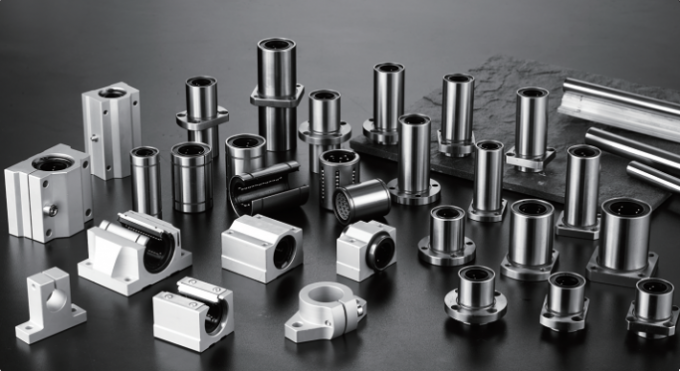